Who’s Who of College TT Shows For Regional Championships 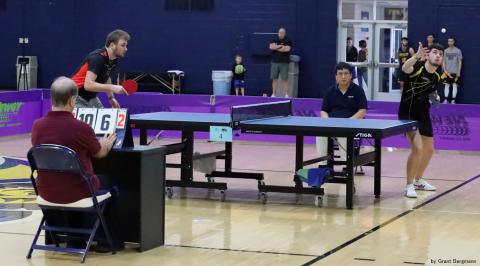 The NCTTA 2020 South Regional Championships were held at the Texas Wesleyan Sid Richardson Gymnasium. For those who want to know  a little college table tennis history, this was the location of the 2005 and 2006 National College Championships! Fast Forward to 2020 and Texas Wesleyan is still among the most feared in college table tennis and is one of two scholarship schools in the nation. Mississippi College however has made a name for itself beating and being beaten by the Texas Wesleyan Rams. This year featured yet another majestic match up!

Mississippi College came in ranked slightly higher than the host school in the Men’s/Coed team competition, and with their new student athletes hailing from several South American countries as well as Russia they provided some firepower. MC would go on to defeat Texas Wesleyan in the Men’s/Coed team regional championships 3-1 as well as taking the Men’s singles championship with Vladyslav Totkalo defeating Texas Wesleyan’s left-handed master Raul Caballero Montes.

Texas Wesleyan is very strong however in the women’s area as they took home the Women’s team title and the women’s singles championship with newcomer Jiaqi Lin defeating her teammate Zhen Deng ).

One has to think with two scholarship table tennis schools that maybe the rest of the region isn’t so strong, but that’s not the case. UT Austin, coming in 3rd in Men’s/Coed teams and 2nd in Women’s teams, would be first place in most other regions. Let’s not forget UT San Antonio, Texas A&M University and Florida International University who are all looking for places in the wildcard for the National Championships.